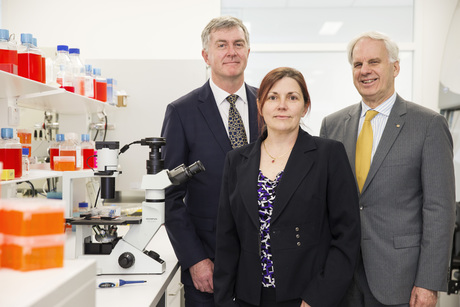 The Westmead Millennium Institute for Medical Research (WMI) has been opened by Prime Minister Tony Abbott and NSW Premier Mike Baird, bringing together several centres of research which were previously spread across six locations on the Westmead hospital campus.

These facilities serve not only WMI but also scientists from the neighbouring institutes and hospitals on the Westmead health campus which, together with the University of Sydney, comprise the Westmead Research Hub. In particular, the institute retains strong links to Westmead Hospital.

“The building encourages interaction and the exchange of knowledge and ideas between researchers who were previously physically isolated from one another,” said Professor Cunningham.

“This is enhancing collaborations across disciplines and I believe it will lead to some significant research advances.”

As part of the upgrade, the institute has established a new centre targeting Australia’s fastest-growing chronic health conditions: type 2 diabetes and obesity. The Centre for Diabetes and Obesity Research (CDOR) will complement existing research into type 1 diabetes by WMI’s Centre for Transplant and Renal Research (CTRR) and will be the facility’s 11th research centre.

Professor Cunningham noted that the WMI’s researchers are ideally positioned to aid the national fight against type 2 diabetes, stating that they “have the ability to translate discoveries into potential therapies for diabetes patients at Westmead Hospital next door”. Such a discovery is currently being helmed by Professor Jenny Gunton, head of the CDOR and chair of Medicine at Westmead Hospital, whose team are investigating ways to increase beige fat in diabetes patients.

Beige fat burns energy, rather than storing it, thus making hosts thinner. Professor Gunton said her study “may find ways to burn calories and increase fitness” and will “progress to a clinical trial of people with type 2 diabetes who are overweight or obese, hopefully late this year at Westmead Hospital”.

Other illnesses investigated at the facility include infectious and immune diseases; cancer and leukaemia; liver and metabolic diseases; eye- and brain-related disorders; and heart and respiratory diseases. Professor Cunningham said the number one goal of all research at the facility is to make discoveries that can one day be used to help patients.

“WMI has a long and successful history of turning medical discoveries into improved health for Australians, and the new building is all about taking what we discover on the lab bench and translating it to the bedside,” he said.

Russell Urquhart looks at how the European Standard EN 14470-1 compares to those governing...

The University of Wollongong has announced its plans for an $80 million Centre of Molecular and...