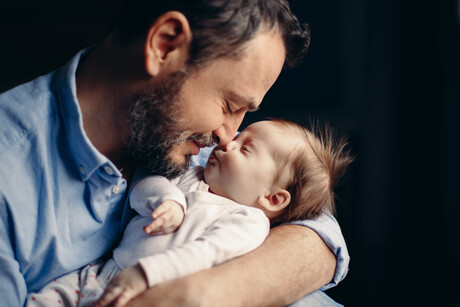 A major international study, published in the journal Cell, has found that new fathers are flooded with prolactin — the same chemical found in breastfeeding mothers.

But while in the mother the hormone activates lactation, in the father it unlocks the paternal instinct and helps to make him a better dad.

Raised levels of prolactin in the blood of new fathers have previously been observed in different species. In male human parents, it was found to rise both pre-birth and during parenting activities such as holding their child. But until now its presence had not been understood.

“Prolactin has historically been known for its role in lactation, but it’s been a mystery why males even have this hormone,” said study co-author Dr Kristina Smiley, from the University of Otago.

“We know it has some metabolic functions but we had no idea what role it played in reproduction for males.”

Dr Smiley was part of an international team which attacked the problem from different angles. The study looked at prolactin function in two different species — rats and mice — where males exhibit contrasting behaviours around their young. Male rats ignore their offspring, whereas male mice are actively involved in the care of their pups.

The two-year study found prolactin is regulated in completely different ways in these two animals, accounting for the behavioural differences. When researchers elevated prolactin levels in male rats, it triggered them to engage in paternal care such as grooming their pups. In contrast, when male mice had their prolactin blocked, they stopped taking care of their pups.

“It’s a really dramatic change,” Dr Smiley said. “The most significant parental behaviour that male mice exhibit is retrieving their pups to the nest to keep them warm and secure. But when we block this prolactin action, they don’t pick them up at all. They just leave them outside of the nest.

“What this paper is showing is that if you get rid of the ability for the brain to respond to prolactin then males stop taking care of their young. You need prolactin in the brain for dads to be paternal.”

Interestingly, raising prolactin in virgin males did not induce paternal behaviour, indicating that the hormone’s effect on behaviour is conditional on prior sexual experience. The study also found that it was not just the level of prolactin but the way prolactin release is regulated by the brain that also differed in these animals, contributing to the differences in paternal behaviours observed in rats and mice.

The results of the study may help investigations into postpartum mood disorders, which also affect men even though they don’t experience pregnancy and childbirth. Dr Smiley explained, “When you look at depression, for example, a postpartum depressed patient and a major depressive patient will show the same outward symptoms. But the brain of a depressed patient looks completely different from a postpartum depression patient.

“It really comes back to how parental care is regulated and not so much how mood is regulated. There’s something really special and unique that occurs in parents, specifically, that leads to these mood disorders. It seems to be more of a disruption in the brain areas that control parental behaviour, as opposed to these emotional centres.”

The research team is now looking at how surges of prolactin might change the male’s brain after mating to prepare them for fatherhood. Dr Smiley noted, “We know so much about maternal care and maternal behaviour, but we don’t understand the paternal brain nearly as well.”