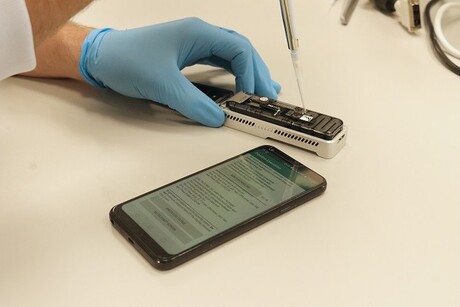 A new mobile app has made it possible to analyse the genome of the SARS-CoV-2 virus on a smartphone in less than half an hour, making genomics more accessible to remote or under-resourced regions as well as the hospital bedside.

Genopo is a free, open-source application available through the Google Play store, developed by the Garvan Institute of Medical Research in collaboration with the University of Peradeniya in Sri Lanka. It has been described in the journal Communications Biology.

“Not everyone has access to the high-power computing resources that are required for DNA and RNA analysis, but most people have access to a smartphone,” said Garvan’s Dr Ira Deveson, co-senior author on the new study.

“Fast, real-time genomic analysis is more crucial today than ever, as a central method for tracking the spread of coronavirus. Our app makes genomic analysis more accessible, literally placing the technology into the pockets of scientists around the world.”

At the size of a USB stick, portable devices such as the Oxford Nanopore Technologies MinION sequencer can rapidly generate genomic sequences from a sample in the field or the clinic. However, analysing genome sequencing data requires powerful computation. Scientists need to piece the many strings of genetic letters from the raw data into a single sequence and pinpoint the instances of genetic variation that shed light on how a virus evolves.

“Until now, genomic analysis has required the processing power of high-end server computers or cloud services. We set out to change that,” said Garvan’s Hasindu Gamaarachchi, also a co-senior author on the study.

“To enable in situ genomic sequencing and analysis, in real time and without major laboratory infrastructure, we developed an app that could execute bioinformatics workflows on nanopore sequencing datasets that are downloaded to a smartphone. The re-engineering process, spearheaded by first author Hiruna Samarakoon, required overcoming a number of technical challenges due to various resource constraints in smartphones. The app Genopo combines a number of available bioinformatics tools into a single Android application, ‘miniaturised’ to work on the processing power of a consumer Android device.”

The researchers tested Genopo on the raw sequencing data of virus samples isolated from nine Sydney patients infected with SARS-CoV-2, which involved extracting and amplifying the virus RNA from a swab sample, sequencing the amplified DNA with a MinION device and analysing the data on a smartphone. The researchers tested their app on different Android devices, including models from Nokia, Huawei, LG and Sony.

The app took an average of 27 min to determine the complete SARS-CoV-2 genome sequence from the raw data, which the researchers say opens the possibility to do genomic analysis at the point of care, in real time. Genopo can also be used to profile DNA methylation — a modification which changes gene activity — in a sample of the human genome.

“This illustrates a flexible, efficient architecture that is suitable to run many popular bioinformatics tools and accommodate small or large genomes,” Dr Deveson said. “We hope this will make genomics much more accessible to researchers to unlock the information in DNA or RNA to the benefit of human health, including in the current pandemic.”